The finer things in life

If you are lucky enough to be invited to a Burberry private event you are likely to be used to the finer things in life. So how did we indulge the guests at the three premiere London stores? We sourced rare whiskies from three continents and paired them with couture chocolates from four time ‘Britain’s Best Chocolatier’ winner, William Curley.

When people think of whisky the first connection people make in their minds is to Scotland. And for good reason. The tradition and the diversity in Scotland is greater than anywhere else in the world. It would have been perfectly fine to offer up a venerable and prestigious single malt but we thought we would make it a little more interesting.

We turned to the whiskies of Compass Box from the UK based American, John Glazer. Founded at the turn of the century, Compass Box has breathed new life into blended whisky market. There are five signature modern blends from Compass Box and all are great whisky. We elected Hedonism. A blend only of specially selected old grain whisky, with not a drop of malt. Or in other words, none of the whisky came from traditional malted barley, copper pot still spirit.

We are big American whiskey fans too and couldn’t resist calling Amathus Drinks and begging for several bottles of the much-in-demand Van Winkle 12yr. Amathus are the only distributor in the UK and even for them there is a strict allocation. So we were delighted when they obliged and allowed us enough stock to perform the tastings at all three stores. Van Winkle use a good amount of wheat (rather than rye) to accompany the predominant corn in their mash bill. The wheat gives a sweeter and slightly less spicy spirit that ages fantastically well in their new American oak barrels.

And our final whisky came from Japan. Whisky buffs have been enjoying award winning Japanese drams for years, but now the premium whiskies from The East are making big inroads in The West – Nikka, one of Japan’s main producers, saw exports increase 18-fold between 2006 and 2012. So to show off the rich and elegant style of the best of them we selected the Taketsuru 17yr Pure Malt from Nikka. 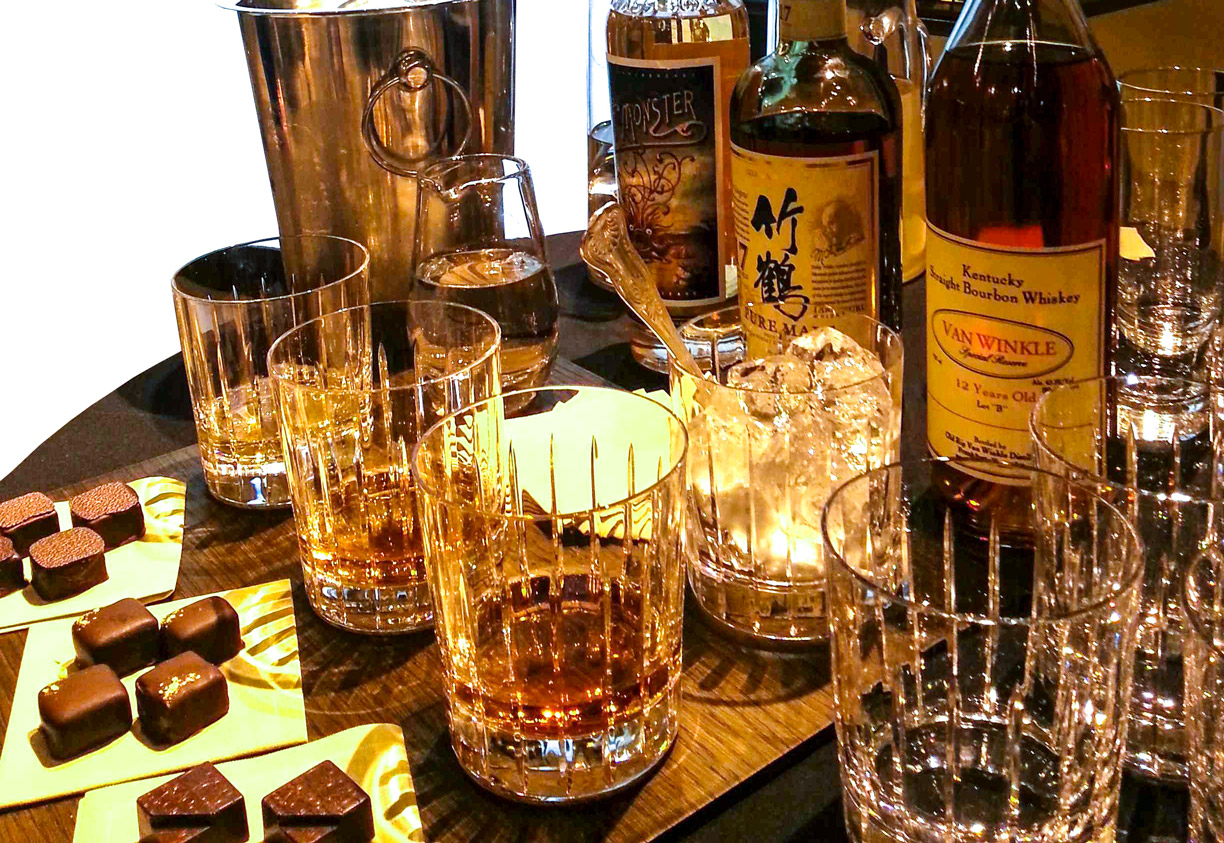 When it came to the chocolate side of the pairing the first name that sprung to mind was that of chocolatier, Williiam Curley. And we knew we didn’t need to look any further. William has won ‘Britain’s Best Chocolatier’ four times, as judged by the Academy of Chocolate. And having devoured many of the Scot’s creations over years we didn’t need much encouragement for the task of pairing up pieces from his Couture Range.

The distinct and fragrant sweet spice of the aged whisky was matched with the herbaceous notes of the delicate honey with the thyme building on the finish. 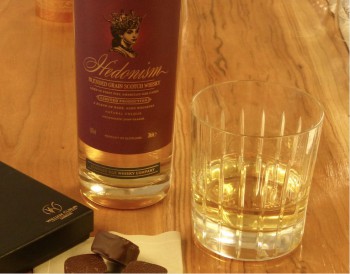 This is a rich and powerful whiskey. The strong flavours of the salt, molasses, caramel and the bitter chocolate were selected to complement the intense spirit. 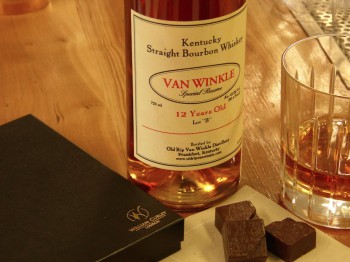 Nikka Taketsuru 17yr with apricot and and wasabi couture chocolate.

The malts in the whisky included a good portion of sherry cask aged spirit bestowing date and preserved fruit notes. The apricot chimed very well with this and the light touch of wasabi was matched by the spice from the long oak aging. 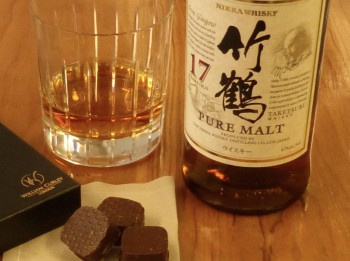 The event itself was an informal affair and we were happy to be able to engage the guests as much as they wished. Several were already knowledgeable about whisky and were intrigued by the diverse selection. Others who would not usually consider themselves whisky people were grateful to be able to learn a little more from an expert and have the opportunity to try something new.

As you can imagine, the chocolates also went down very well. And the reaction of those consuming them was a reminder that when at its best there is there are not many substances that can deliver as much instant pleasure as the finest chocolate.